You might be wondering whether the United States government recognizes same-sex marriage for green cards and other immigration benefits. Fortunately, it does. As with any other immigration case, you may benefit from talking to an Austin immigration attorney who can help you through the process, explain each step and answer your questions along the way.

Here’s what you need to know about same-sex marriage green cards and other immigration benefits available to same-sex couples. 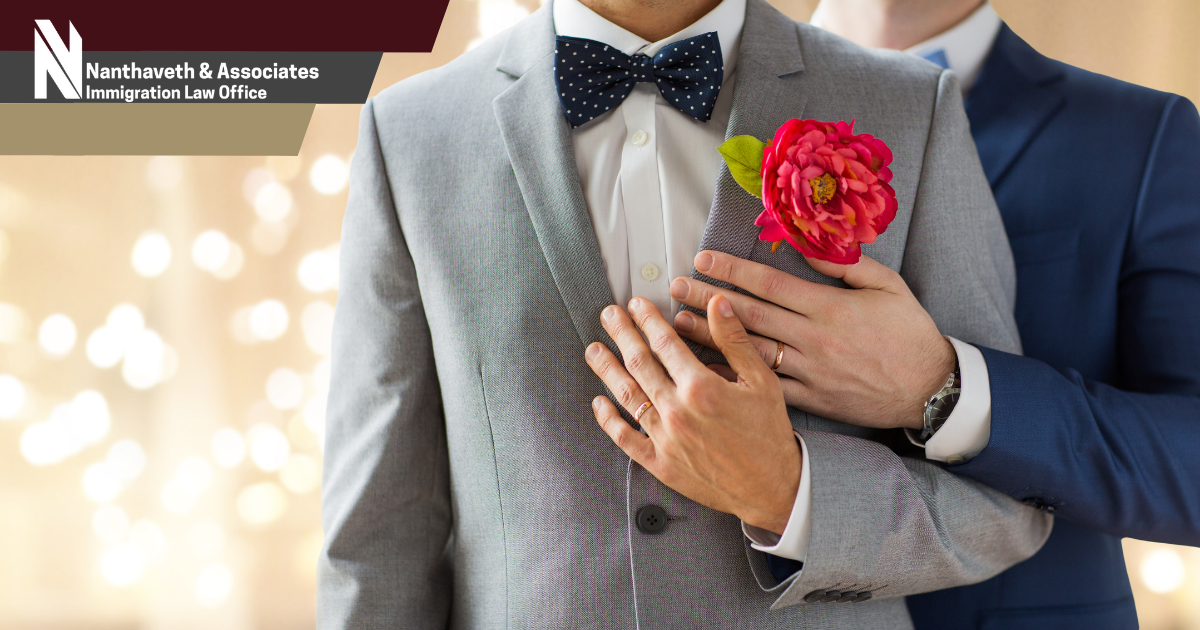 Same-sex marriage is recognized as legal in every U.S. state, and the federal government recognizes these unions as legitimate when it comes to immigration. That means you can use all family-based immigration petitions to sponsor your same-sex partner as a U.S. immigrant. You, like all other couples, will be held to the same standards outlined in U.S. immigration law. That means you’ll have to show that you have a bona fide relationship and that your marriage is legally valid.

What is a Bona Fide Marriage Between Same-Sex Couples?

When you apply for an immigration benefit based on your marital relationship, you’ll have to show U.S. Citizenship and Immigration Services, or USCIS, that you’re in a bona fide marriage. A bona fide marriage is a genuine marriage – you’re married because you want to be together and intend to spend the rest of your lives together. (In contrast, a fraudulent marriage is one in which one party married the other simply to gain an immigration benefit.)

It's illegal to marry someone just to get an immigration benefit. If USCIS believes that your marriage is not genuine, it will not approve your same-sex marriage green card petition.

It’s up to you to prove that your marriage is valid when you apply for a green card for your spouse. USCIS will want documentation that shows you’re in a bona fide marriage.

Related: The complete guide to renewing a green card in Texas

How to Show USCIS That Your Marriage is Bona Fide

When your Austin immigration attorney submits your same-sex marriage green card petition to USCIS, they’ll include supporting documentation that shows USCIS that you’re in a bona fide marriage. (You’ll have to supply the documentation.) That documentation may include anything that any other married couple is likely to have, such as:

The more documentation you can include, the better off you’ll be. It’s always best to head off immigration officials’ questions by providing adequate proof that you and your spouse are married because you want to be – not because one of you wants an immigration benefit.

Related: Can you get a green card if you’ve been convicted of a crime?

What if You Were Married to an Opposite-Sex Partner Before?

It’s okay if you or your spouse was married to an opposite-sex partner before your current marriage – many people were. However, you can expect that to come up during your green card interview; the USCIS official in your case will most likely ask about any prior marriages either of you had (same-sex or opposite-sex).

You’ll also have to prove that your previous marriages have been lawfully terminated, so you should have a copy of your divorce decree, an annulment document or a death certificate for your former spouse.

What if You Were Married in Another Country?

If you were married in another country that does not recognize same-sex marriage, you may need to re-marry your spouse in the United States. In that case, you’ll likely need a K-1 fiancé visa (see the later section “Fiancé Visas for Same-Sex Couples” to learn more). You may want to talk to an Austin immigration attorney to find out what steps you should take.

Unfortunately, K-1 fiancé visas are not available to the fiancés of lawful permanent residents. If you’re in a situation like this, you may want to speak with an attorney about your options.

Related: How to get a U.S. green card

Can Same-Sex Couples Get Other Immigration Benefits?

Same-sex couples are entitled to all the other immigration benefits that opposite-sex couples are entitled to. Because the United States recognizes same-sex marriage at the federal level, it would be discriminatory if you were denied an immigration benefit that you otherwise qualified for based solely upon the reason that you and your spouse are the same sex.

You are entitled to apply for a fiancé visa for your foreign fiancé whether you’re a same-sex couple or a heterosexual couple. As long as the sponsor is a United States citizen, you can apply for a K-1 visa. These visas are not available to the fiancés of lawful permanent residents, however. If you’re a lawful permanent resident with a foreign fiancé, you may need to speak with an attorney about your options.

Do You Need to Talk to a Lawyer About Same-Sex Marriage Green Cards and Other Immigration Benefits?

Nanthaveth & Associates may be able to help you petition the U.S. government for a same-sex marriage green card or other immigration benefits. Call our office now to schedule your free consultation with an experienced, caring and knowledgeable attorney who will ask you a few questions about your situation and give you the legal guidance you need.

What is a green card, and who can get one? Expand

A green card is a card issued by U.S. Citizenship and Immigration Services, or USCIS, that proves a person is a lawful permanent resident of the United States. A green card authorizes the person named on it to live and work anywhere in the U.S. Only people who are eligible for admission into the United States and have followed the appropriate channels can apply for lawful permanent residency.

What is USCIS? Expand

USCIS is short for U.S. Citizenship and Immigration Services, which is part of the U.S. Department of Homeland Security. It’s the government agency that oversees immigration into the United States. It approves and denies green cards, work permits, travel permits and naturalization, as well as some other types of immigration benefits.

Most green card applications are approved, but as many as 18 percent of them have been denied in recent years. If you receive an unfavorable immigration decision, such as the denial of a green card, you may be able to appeal your case or file a motion to have it reopened or reconsidered.

What is a lawful permanent resident, or LPR? Expand

A lawful permanent resident is a person who legally resides in the United States without citizenship. LPRs are foreign nationals who are authorized to work or live anywhere in the U.S. or its territories, and who can sponsor some relatives to bring them to the United States. Lawful permanent residents can eventually apply for U.S. citizenship if they wish, but they do not have to do so.

What is a visa? Expand

A visa is an authorization from the United States government that allows a person to enter the U.S. legally. Visas are only valid for a specific amount of time, and every visa’s expiration timeframe is different. You can get an immigrant visa, which means you intend to immigrate to the U.S., or a nonimmigrant visa that indicates you’re only staying temporarily.

What is the Visa Bulletin? Expand

What are biometrics when it comes to immigration? Expand

Biometrics are measurements of your identifying features. During a biometric screening for immigration purposes, a government official captures your fingerprints, takes your photo and gets a copy of your signature.

Will I have to attend an immigration interview? Expand

Many people must attend an immigration interview to obtain a visa or green card. If you do have to attend an interview, your attorney will let you know. You should receive a notice in the mail that advises you on where to go and when to show up for your interview.

What is the citizenship test? Expand

In order to become a naturalized citizen of the United States, you must take and pass the citizenship test. The official administering the test will ask you 20 of 128 possible civics-related questions, and you must answer at least 12 of them correctly. You will also be evaluated on your ability to speak, read and write in English. If you don’t pass the test, you can be retested on the portion of the test you failed (English or civics) between 60 and 90 days from your initial interview.

What is the Public Charge Rule? Expand

The Public Charge Rule is a ruling from the U.S. Department of Homeland Security that requires immigrants to be unlikely to become dependent on social services and public programs (such as financial aid from the government).