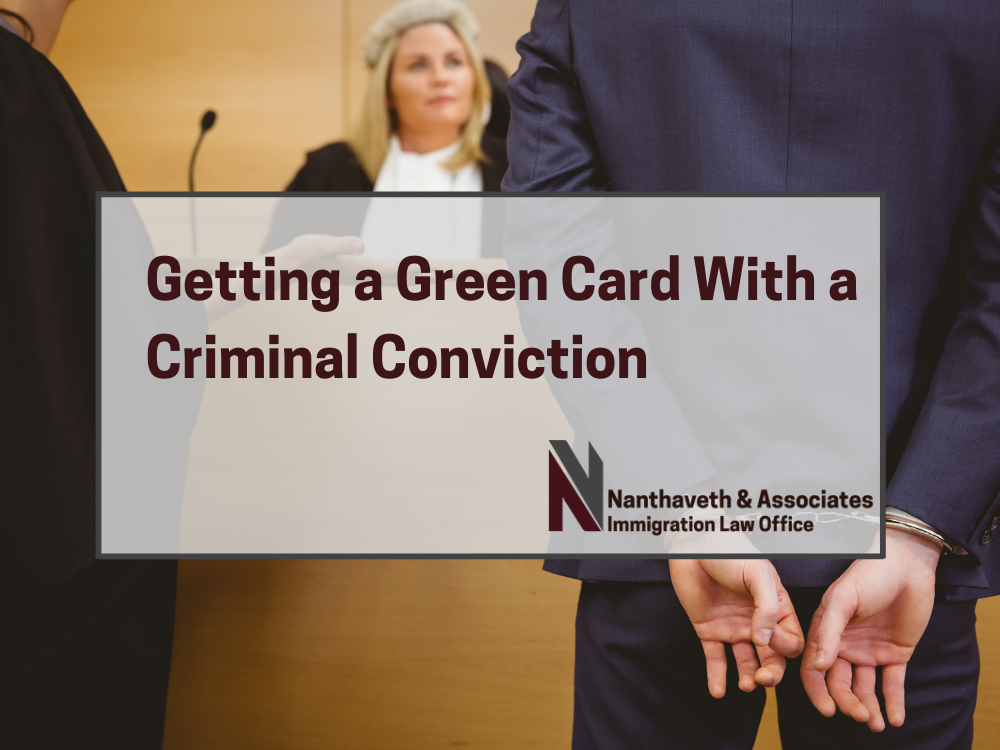 Having a criminal record can put the brakes on your green card application. If you have a criminal conviction in your past, it’s in your best interest to talk to an Austin immigration lawyer who understands inadmissibility and how having a record could impact your ability to emigrate to the U.S.

Are You Eligible For a Green Card With a Criminal Conviction?

Your immigration attorney will help you determine whether your record will prevent you from successfully applying for a green card, but there are no guarantees in immigration – nobody can predict how U.S. Citizenship and Immigration Services will rule in most cases. The facts of your circumstances matter, and USCIS may look at things like:

What is a Criminal Conviction? 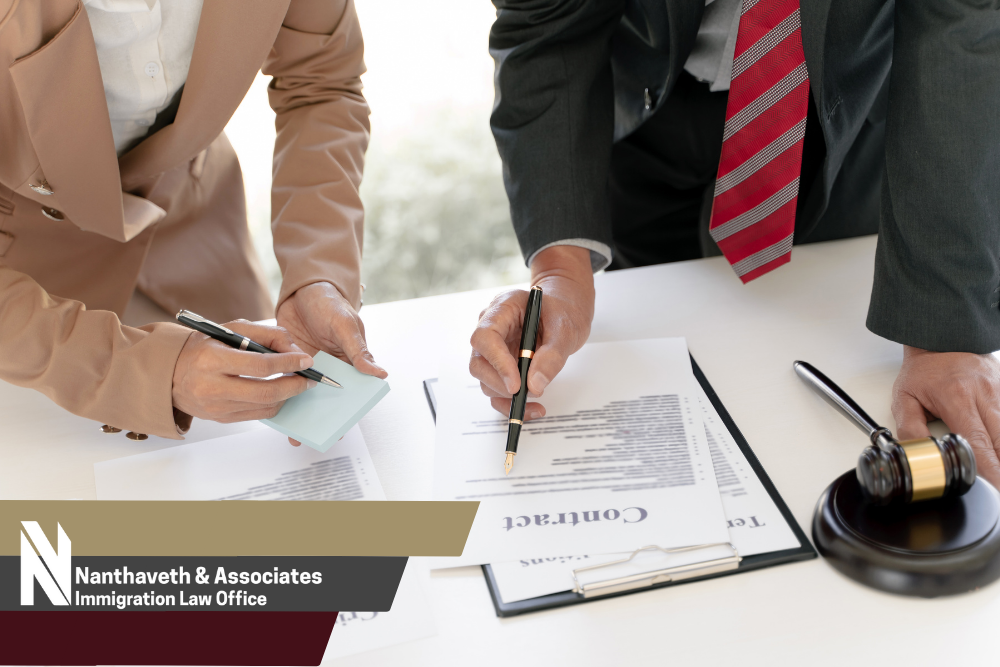 A criminal conviction is not the same thing as an arrest or criminal charges. In fact, only a judge can convict someone of a crime. If you are arrested, charged with a crime, and tried in court – with or without a jury – the judge will decide whether you are guilty or not guilty. A guilty verdict is the only way you can be considered convicted of a crime.

For example, if you’re arrested because the police say you robbed a bank, but the state drops the charges against you, you have not been convicted of a crime. This does not affect your immigration application.

Here’s another example: Let’s say the police arrest you because they believe you robbed a bank. You go to court and the judge asks you whether you’re guilty or not guilty, and you say that you’re not guilty. The judge sets a trial date for you, and you show up in court for your trial. The judge reviews the evidence and decides that you’re not guilty. In this case, you have not been convicted of a crime. This does not affect your immigration application.

Another example includes: The police arrest you because they suspect you robbed a bank. The prosecutor offers you a deal if you plead guilty, whether you committed the crime or not, and you choose to take the deal. You go to court and the judge asks you whether you’re guilty or not guilty, and you say you are guilty. In this case, you have been convicted of a crime. This may affect your immigration application.

Finally, one more example: The police arrest you because they suspect you robbed a bank. You go to court, plead not guilty, and come back for your trial. During the trial, the judge reviews the evidence and decides that you are guilty. In this case, you have been convicted of a crime. This may affect your immigration application.

What if the Sponsor Has a Criminal Record?

So, can a person with a criminal record sponsor someone to come to the United States?

Generally, yes. Only convictions for some offenses against minors (people under the age of 18) will automatically disqualify a U.S. citizen from sponsoring another person for a green card. Generally, the following criminal convictions will prevent a sponsor from bringing a family member to the U.S. (but not in all cases):

If a person has been charged with any of these crimes but the charges were dropped, or if the person was found not guilty of the crime, the offenses should not affect the person’s ability to sponsor an immigrant. However, you should speak to an Austin immigration attorney to be sure.

Crimes That Make You Inadmissible to the U.S.

Some crimes do make you inadmissible to the U.S., such as those involving moral turpitude and controlled substances. Drug trafficking, kidnapping, prostitution and money laundering can also make you inadmissible. However, there are always exceptions to the rules. It’s best to talk to your lawyer about your situation before you apply for a green card.

What is Moral Turpitude?

In order to qualify for a green card, you must be a person “of good moral character.” That means USCIS will look at your criminal history and determine whether you lied on your application. Usually, USCIS will examine your conduct in the 5 years before your application (3 years if you’re applying as a spouse of a U.S. citizen) – but if you have a criminal record that involves crimes of moral turpitude, USCIS could deny your petition immediately.

Moral turpitude refers to “conduct that shocks the public conscience as being inherently base, vile, or depraved, contrary to the rules of morality and the duties owed between man and man, either one’s fellow man or society in general.” These types of crimes are called crimes involving moral turpitude, or CIMTs.

Some crimes that can make you inadmissible to the U.S. include:

Can You Immigrate to the U.S. With an Aggravated Felony on Your Record?

Generally speaking, an aggravated felony conviction makes a person inadmissible to the United States. If you have been convicted of an aggravated felony while in the U.S. on a visa or with a green card, you will most likely be placed in removal proceedings. If an immigration judge orders you to leave the country because you were convicted of this type of crime, you will be ineligible for cancellation of removal, voluntary departure, and even some types of waivers of inadmissibility – and after you have been deported (removed from the United States), you will be permanently inadmissible. That means you cannot legally come back, and if you try to return, you could face a federal prison sentence.

The table below lists the most common aggravated felonies that prevent people from immigrating to the United States according to the Immigration and Nationality Act.

What is a Waiver of Inadmissibility?

In some cases, the U.S. government makes exceptions. However, you’ll have to talk to your immigration attorney about the specifics in your own situation. In some cases, people who have committed a CIMT qualify for a waiver, such as those who have:

Waivers are available to many other people who are inadmissible for reasons other than crimes involving moral turpitude, though – your attorney can help you determine whether you qualify.

Check out these frequently asked questions about criminal records and green cards, and if you don’t see the answer you need here, please call our office so we can help you out.

Can You Get a Green Card With a DUI on Your Record?

A DUI conviction will not necessarily prevent you from getting a green card. However, if it’s not your first drunk driving conviction, or if it’s combined with other crimes – such as vehicular manslaughter or a drug charge – it may disqualify you from getting a green card. Worse, it can cause the U.S. government to revoke your visa and have you removed from the country.

What Kind of Background Check Does USCIS Do on Applicants?

USCIS performs extensive background checks on visa and green card applicants. The reason you provide your fingerprints during the application process is so that the U.S. government can check them against criminal databases. Additionally, the FBI conducts “name checks” on all naturalization applicants, which means you’ll be thoroughly vetted before you can become a U.S. citizen.

Do You Have to Talk About Your Criminal Record at a Marriage-Based Green Card Interview?

When you attend your green card interview, you must be honest with the immigration official who is asking you questions. If the official asks about your criminal record, you have to tell the truth – and that may mean you have to discuss previous convictions. If you lie, or if you choose not to answer certain questions, you need to know that the immigration official handling your case can – and most likely will – deny your petition.

The same is true if you have pending charges against you. If the immigration official who is interviewing you asks about your pending charges, there’s a good chance that he or she already knows – and you have to tell the truth or risk losing your chance at green card approval.

What Are the Most Common Reasons Visas Green Cards Are Revoked?

There are several reasons the U.S. government may revoke a person’s green card, including:

Do You Need to Talk to a Lawyer About Getting a Green Card With a Criminal Conviction?

You may be able to get a green card with a criminal conviction – and we may be able to help you.
Call us at 512-829-7881 for a free consultation with an immigration attorney who will answer your questions and help put you on the right path.

Posted in Green Card and tagged Green Card With a Criminal Conviction, Waiver of Inadmissibility
← How to Get a Green Card in the U.S.Everything You Need to Know About the U.S. Citizenship Test →