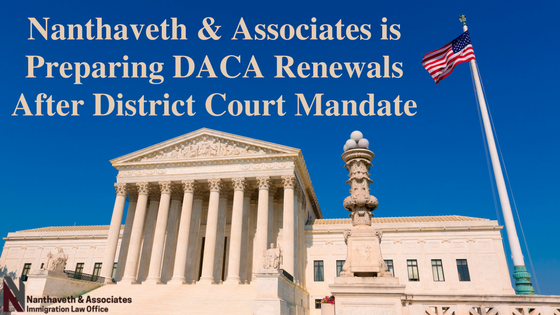 In the wake of a recent order by the district court to continue maintaining the Deferred Action for Childhood Arrivals (DACA) program, immigration law firm Nanthaveth & Associates, is encouraging DACA recipients to prepare their renewal paperwork for filing.

DACA is an immigration program that was put in place in 2012. This program allows individuals who were brought to, and illegally remained in, the United States as minors to be granted a two-year period of deferred action from deportation and be eligible for a work permit.

DACA has been at the forefront of political conversation since September 5, 2017, when the Trump Administration decided to rescind the program.

Although the program still faces future uncertainty, on January 9, 2018, the district court directed the government to continue maintaining the DACA program nationwide and under the same terms and conditions, with the following exceptions:

The court also specified that USCIS would be publishing information on how to proceed with the DACA renewal process, but no such information has been released in January.

Although no official process for renewing DACA has been outlined by USCIS, one can be expected to be published in the upcoming weeks as it was court mandated.

For this reason, Nanthaveth & Associates is advising clients to consider waiting to file DACA renewals until the process is established. Waiting to file may prevent your application from being denied or delayed if it doesn’t follow the new process.

Nanthaveth & Associates is preparing DACA renewals now, as the future of the DACA program remains unknown, and will hold them until the renewal process is established in the upcoming weeks.