Each year, hundreds of thousands must navigate the complicated immigration processes of the United States (US). Without a doubt, immigration attorneys provide a necessary and priceless service to those facing the trials of immigration court. Yet, many do not have access to a lawyer because of lack of funding, remote location, or another reason. The critical importance of expert representation cannot be overstated. According to Eagly & Shafer, those immigrants with representation had more successful legal outcomes. Above all, the advice and counsel from an experienced immigration attorney can be the difference between success and deportation.

In today’s world migrants and immigrants to the US face difficult paths. For example, the Trump administration has continually challenged the rights of immigrants. Under Trump, government officials have separated migrant families and begun plans for a US-Mexico border wall. In tweets and public statements, the president has attacked beneficial programs like the diversity visa lottery and temporary protected status. Thus, it is more important than ever that immigrants are protected by skilled counsel.

Unfortunately, immigration court proceedings can take months or even years from start to finish. Skilled attorneys provide irreplaceable services to immigrants facing deportation or removal from the US. Yet, major barriers exist across the country that prevent countless people, especially detainees, from retaining counsel. Considering that legal representation is associated with successful outcomes, barriers are a significant area of concern.

In 2015, an extensive report by Eagly & Shafer reviewed years of data from the immigration court system. The authors also wrote a special report for the American Immigration Council, which is easier to read and understand. In summary, the report highlights the importance of legal counsel in immigration court and points out ways in which the system fails specific groups, like detainees. This article will present some of the findings of the report, including:

Nanthaveth & Associates is a trustworthy law firm serving clients in Austin, Texas, and beyond. If you need help applying for a visa or green card, beginning the naturalization process, or defending your right to remain in the US, a skilled attorney is an necessity. Therefore, contact Nanthaveth & Associates today for a free initial consultation with a qualified immigration lawyer.

Like American citizens, immigrants facing the justice system have a right to an attorney. But unlike US citizens, they are not entitled to representation if they cannot access or afford it. Thus it is difficult, if not impossible, for some immigrants to receive adequate legal counsel. This is especially true for some detainees who face deportation. However, this group was the least likely to obtain legal counsel. Only 14% of detained immigrants obtained attorneys, while 66% of the non-detained group did. This large discrepancy is likely due to isolation, both of detainees and detention locations.

Secondly, an immigrant’s ability to pay can be a barrier to legal counsel. Because immigrants do not have absolute entitlement to an attorney, money can be a significant barrier. This is especially true for migrants seeking asylum, who may have fled their homes with little possessions. National data reveal that pro bono services available fall below demand, meaning that many go without counsel. Such requirements further hinder detainees’ access to lawyers because they cannot work. Unfortunately, with no money and a shortage of pro bono services, certain immigrants have few good options.

In addition to the above, a person’s home state or city also matters. Physical location and/or jurisdiction also makes a significant difference in the likelihood of representation. For non-detained immigrants in New York, 87% obtained legal counsel. In fact, those in New York, NY, have the highest representation rate across all jurisdictions. Yet in other cities and states, the data are less positive. For example, those facing immigration court in Miami, FL, were only represented in 59% of cases. In Atlanta, GA, attorney representation was even lower (47%).

In addition to regional differences, representation rates often differed between cities. For example, those attending courts in small cities, with populations less than 50,000, were the least likely to have attorneys. Considering the possibilities, this is likely due to the fact that fewer experienced immigration attorneys practice in small cities. The table and figure below highlight the differences between immigrants in jurisdictions in small, medium, and large cities. Note that those with the least likelihood to have representation were detained immigrants in small cities.

Table 1. Representation Rates Based on City Size and Detention Status

Figure 1. Detainees are the least likely to have representation 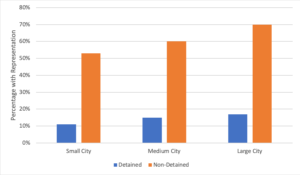 Finally, Eagly & Shafer’s report highlights another barrier – nationality. Despite being the largest immigrant group, Mexicans were the least likely to have legal representation, though they had the greatest likelihood of being detained (see the data here). On the other hand, Chinese citizens in immigration courts possessed legal representation 92% of the time. Disparities are likely due to a combination of factors, such as likelihood of detainment, access to funds, and language barriers.

In conclusion, while up to 37% of immigrants facing court have attorneys, it varies based on several factors. These include the following:

For immigrants facing the US court system, legal representation is critical. Often, it means the difference between good and bad outcomes, and protects immigrants from deportation or other unfavorable decisions. Eagly & Shafer’s report found that immigrants who secured legal representation were more likely to be successful in court. This doesn’t just apply to final decisions – lawyers make the entire process easier for their clients. In fact, immigrants with attorneys were “more likely to be released from detention, avoid being removed in absentia, and obtain immigration relief.”[1]

Expert lawyers increase the odds of positive outcomes, even in dire situations like removal proceedings. Overall, those with legal representation are more likely to:

Unless otherwise noted, all data presented in this article are sourced from Eagly & Shafer’s sweeping report on attorney access in immigration court. Eagly & Shafer published their report, A National Study of Access to Counsel in Immigration Court, in the University of Pennsylvania Law Review in 2015. In summary, the report compiled years of immigration court data, roughly 1.2 million records, from 2007-2012. The authors obtained the massive dataset from the Executive Office of Immigration Review (EOIR). In 2016, Eagly & Shafer published a special report via the American Immigration Council. This special report summarizes and presents the most shocking and notable facts from the longer report. In conclusion, Nanthaveth & Associates compiled utilizing both versions of the report.

Are you or a loved one facing immigration court proceedings? In short, the process can be lengthy, complicated, and frustrating. The lawyers at Nanthaveth & Associates are experienced in all facets of immigration law, and are ready to help you find a path to success. Their qualified attorneys will represent your case with compassion and professionalism, protecting your rights and dignity. Always remember – even if your options seem limited, hope for success exists. In conclusion, contact Nanthaveth & Associates today for a free initial consultation with an expert immigration lawyer.