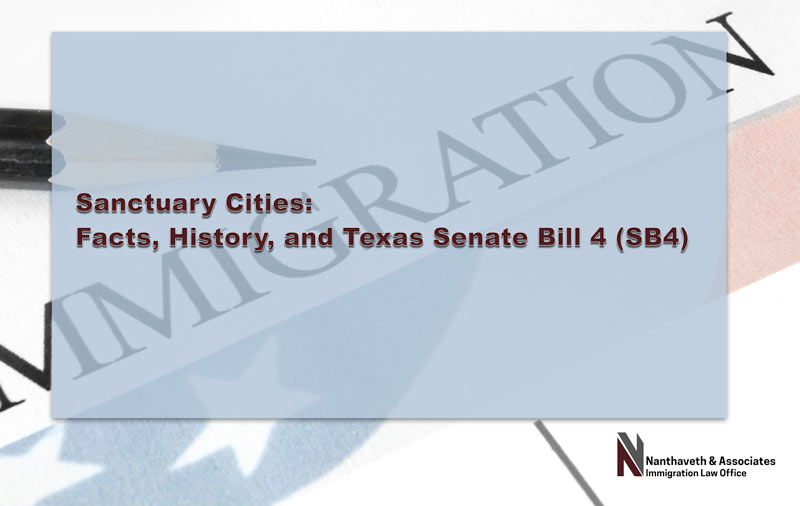 The topic of immigration, regardless of legality, is one of the most controversial and complicated issues in American politics today. Terms like deportation, undocumented immigrant, and sanctuary city are often debated via public forums throughout the country. You may find yourself wondering what it means when a jurisdiction, whether a city, county, or other municipality, claims “sanctuary” status. Further, much of the information available about sanctuary cities is often partisan and opinionated. Therefore, it is difficult to draw concrete conclusions about sanctuary cities.

If you or a loved one have any questions or concerns about your rights as an immigrant, the best course of action is to consult an experienced and professional immigration attorney. Nanthaveth & Associates offers free initial consultations and provides skilled legal representation in all facets of immigration law.

What is a Sanctuary City?

At its core, we define a sanctuary city by its interaction (or lack thereof) with the US Federal Government and Department of Justice (DOJ) regarding the enforcement of immigration policies and removal procedures such as reporting known undocumented immigrants, raids, and deportation. While there is no official definition, sanctuary status is conveyed on any city, municipality, county, or state that does not aid or assist the federal government with actions such as ICE raids or deportations. In fact, some sanctuary jurisdictions have even passed laws intended to resist the targeted actions of the Trump Administration, DOJ, and ICE.

Numerous sanctuary cities and counties can be found across the United States. These include major metropolitan areas like New York City, San Francisco, Chicago, Baltimore, Philadelphia, and Los Angeles. Each jurisdiction may have different laws or procedures that ultimately define their sanctuary status. Such policies are intended to protect their unique immigrant populations.

Opponents of sanctuary cities, such as the Trump Administration or Attorney General Jeff Sessions, claim that such entities are endangering the citizenry of the United States through their protection of undocumented immigrants and their families. One popular argument is that sanctuary cities are crime-ridden and dangerous. Peer-reviewed literature refutes such opinions. One article published by Martinez, Martinez-Schuldt, & Cantor found that the “limited cooperation policies” of sanctuary jurisdictions create a “spiral of trust” between law enforcement officials and the community.[1]

President Donald Trump has often criticized sanctuary jurisdictions for a variety of reasons. He asserts that such cities or counties have “caused immeasurable harm to the American people and to the very fabric of our Republic.”[2] Throughout his tenure, President Trump has continually targeted sanctuary cities and counties via rhetoric, tweets, and executive orders. Likewise, those in his administration continue to villainize undocumented immigrants, calling them derogatory names such as “criminal aliens” despite overwhelming evidence of the contrary.[3]

One of the first actions of the Trump Administration was to sign Executive Order (EO) 13768 on January 25, 2017. EO 13768 targeted sanctuary cities across the United States. Citing the Immigration and Nationality Act (INA), this order sought to punish sanctuary jurisdictions by withholding federal grants and funds (EO 13768 Sec. 9(a)). Additionally, the EO intended to inform the public of the “potential dangers” of such localities (EO 13768 Sec. 9(b)), and to direct an investigation into the amount of federal grant funds that serve sanctuary jurisdictions (EO 13768 Sec. 9(c)). You can read further and view the entirety of EO 13768 here.

Several state and municipal entities challenged EO 13768, arguing that the order was illegal because it was unconstitutional. Most challenges asserted that EO 13768 was in direct disagreement with the Tenth Amendment to the Constitution of the United States, which ensures balance of power between state and federal governments and protects states from overbearing or forceful federal policies. For example, the city of San Francisco’s 2017 challenge stated that the order was a “severe invasion of [its] sovereignty,”  which it believed was a violation of the Tenth Amendment.[4]

In August 2018, the Ninth Circuit Court of Appeals ruled EO 13768 unconstitutional. Speaking for the majority, Chief Judge Sidney Thomas stated, “Absent congressional authorization, the administration may not redistribute or withhold properly appropriate funds in order to effectuate its own policy goals.”[5] Because of this ruling, sanctuary cities and their federal funding status can be considered protected for the time being. Though this assumes no other interference at the state level, such as with Texas’ SB4.

Despite such rulings, the Trump Administration continues to be a flagrant opponent of sanctuary cities. Therefore, it is reasonable to speculate that the President will continue to challenge the rights of such localities.

Does Texas have Sanctuary Cities?

Because of the potential drastic consequences of SB4, several organizations filed appeals challenging the constitutionality of the bill. In August 2017, a judge in San Antonio temporarily blocked the enforcement of SB4. This action effectively prevented enforcement of its policies. As of March 2018, the Court of Appeals allowed the majority of SB4 to go into effect. Thus, SB4 is currently enforced in the state of Texas. But rights groups such as the ACLU continue to challenge the law. You can read further about the ramifications of SB4 here.

The implementation of SB4 means that sanctuary jurisdictions technically no longer exist within the state of Texas. This means that it is imperative that immigrants understand their rights and, if necessary, seek the advice and services of an expert immigration attorney. Only an attorney experienced in immigration law can accurately direct and guide you through any legal challenges you may face. Nanthaveth & Associates continually watches the evolution of SB4 and its enforcement, and can provide expert legal counsel upon the matter. In conclusion, you can schedule a free initial consultation today to discuss any immigration case, concern, or question.